Hard to believe that ArtisTree Lead Mechanic Gordon Griffin’s first set of tools was a pile of rocks, but when you’re five years old and living in a one traffic-light town, you learn to be resourceful — especially if you think your daddy’s push mower needs a few minor adjustments.

When his dad left their Collinsville, AL, trailer home for an over-the-road trucking job, little Gordon decided the mower didn’t need a camshaft and removed it with a few blows of hefty limestone.

When his father returned and tried to start it, all he had to see was the tossed camshaft and scratched rock before telling his son to “get his butt up in the truck.”

“At that point I thought I was in big trouble, but Daddy said if I was going to take things apart, I needed to have real tools,” Gordon said. “So he drove me down to the flea market and we picked out a set.”

From then on, when he wasn’t playing in his dad’s truck cab (which he learned to drive sitting on his daddy’s knee at age 9), Gordon used his tools “just to take things apart and put ‘em back together.” Soon he was building go-carts, assisting his dad with car tune-ups and tolerating school. “I really didn’t like school that much but I went anyway.” Lunch and PE were his favorite subjects, and he finally grew from being “itty bitty” to a hustling high school basketball player. Too young for a mechanics vocational class — and not too keen about the remaining choices of welding, woodworking and home economics — Gordon enrolled in a school/job program where he could work as a diesel apprentice.

It was at the diesel yard where Gordon really came into his own by once again relying on his self-teaching skills. Not only did the 17-year-old work on trucks but he also drove them around the loading dock area, saving the company money and pre-empting the need for seasoned professional drivers. “I could put a 48-ft. trailer where I wanted it.”

Gordon would remain in the truck business for the next several years – first a furniture repo driver, then a car repo driver while doing mechanical work on trade-ins. A move to Florida meant new employment — testing lawn/tractor equipment for an international manufacturer followed by running a mechanics shop at a major landscape company before being laid off after a company merger.

Employed at ArtisTree since 2014, Gordon has since been promoted to Lead Mechanic, supervising a team of two to make sure the nationally ranked company’s fleet and equipment are running smoothly. While every day is different, the one constant is organization — a “big deal” for Gordon so that inventory can be managed and work orders processed efficiently. Modest about his contributions to the $18-million landscape firm, Gordon will only allow that he has “some kind of gift, I guess.”

“I don’t know – it’s just that something will be wrong with a piece of equipment and I can pretty much look at it and say, ‘There’s the problem.’”

But Gordon isn’t shy about saying what he likes best about ArtisTree: the friendly, family-like atmosphere.

“I was only here a few weeks when I saw a man in a flannel shirt standing in our work area. I thought he was a vendor or someone, so I stopped and asked if I could help him with something. He apologized for not coming over earlier to meet me. He said he was Joe Gonzalez, the company owner.

“I’ve never had that happen to me before. That sure was pretty nice.” 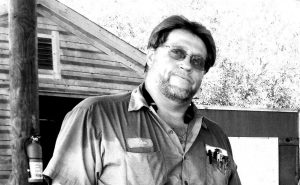 We just wanted to let you know how pleased we are to have hired ArtisTree to perform our backyard landscaping project. It is a real pleasure to do business with a company that really does strive for complete customer satisfaction."

This form needs Javascript to display, which your browser doesn’t support. Sign up here instead